With all this swirl going on about Miguel Cotto, his move up to the Middleweight Ranks and how Freddie Roach might impact the outcome of the June 7th bout between Miguel Cotto and Sergio Martinez -- very little time is being spent focusing on what Sergio Martinez can and will do in the ring come fight night. Standing at a solid 5’ 10”, come June 7th Sergio “Maravilla” Martinez will be the bigger man in the ring- a first in a very long time. In fact, the last time Sergio Martinez could make that claim was back in October of 2008 when he fought Alex Bunema.

The size and weight advantage Martinez will have going in to the fight will play a major roll in his ability to dictate the pace against Miguel Cotto. Martinez is southpaw who also happens to be a natural counter puncher. He uses his movement, but more so his hands down approach to defense and lure his opponents into being the aggressor in the ring. By countering his adversaries and using a stick and move approach, Martinez has been able to produce stellar performances throughout his career. The last time Miguel Cotto faced an adversary with attributes similar to that of Sergio Martinez was back in December 2012 when he faced Austin Trout for the WBA light middleweight title. While Cotto did appear flat at times during the match and quite possibly could have over-trained --no one can take away the fact that Trout was able to use his reach and size advantage to keep Miguel Cotto on the outside making it a long and frustrating night for the future hall of famer.

Sergio Martinez is a proud and experienced Champion who knows how to pace himself for a 12 round fight, break down his opponent and close the show when the opportunity presents itself. Although not the aside for this title defense, it will be business as usual for the man who has been defending his Middleweight crown since 2010 - if indeed it was the style and game plan of Autsin Trout that made Cotto perform in the manner in which he did. For Miguel Cotto’s sake, one can hope his performance was in fact the result of over training. If not, expect Sergio Martinez to have a throwback performance, closing the show in spectacular fashion.

Back to main page 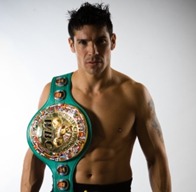 By M. A. Waterman