NEWS
Back to main page 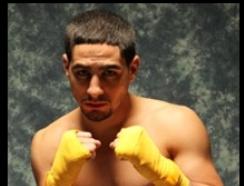 MAKING 140 MIGHT BE THE ONLY CHALLENGE LEFT AT JR. WELTERWEIGHT