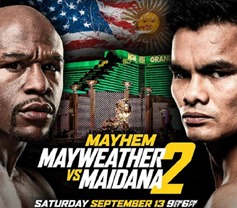 By M. A. Waterman

“Marcos Maidana is a tough customer and he gave me a fight that had me work for the victory. His style is difficult at best, but with experience comes a way and will to win. I’m not one to give second chances in the ring, but I want to give the fans what they want to see. I will be as prepared as I always am when I step in the ring on September 13. I only see the outcome one way and that’s another successful night for me and my team”

Preparation for September 13th culminates with A 5 city press tour. The press tour Kicks off on Monday, July 14th in NYC and concludes on July 17th in Los Angeles California. Both fighter will enter training camp immediately following the press tour.